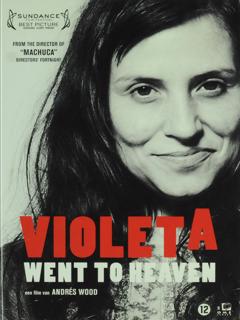 (This text has been automatically translated by DeepL)
Violeta Parra (1917 - 1967) was the Edith Piaf & Bob Dylan of Chile: a folk singer and pop icon who, with hits like Gracias a la Vida, called for social and political renewal and became the voice and star of a nation.
Violeta was born in 1917 in southern Chile. She was raised by her father, a poor widower and alcohol-addicted guitar player, who severely neglected her. At a young age she became familiar with traditional Chilean folk music and saw it as her task to spread and preserve this music. She became a musical sensation and Chile's national hero and world star. Later she left with her lover for Europe where she developed her music and also became known for her visual art which was even exhibited in the Louvre.Violeta went to heaven, awarded the Grand Jury Prize at the Sundance Film Festival, is based on the diaries of Angel, one of her daughters. Parra's music is beautifully interwoven with her eventful life: a raw and emotional portrait of a legendary artist.