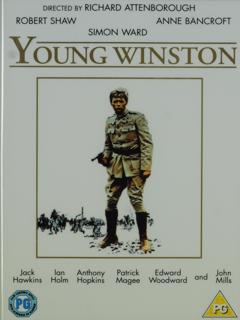 (This text has been automatically translated by DeepL)
In Young Winston, Academy Award-winning director Richard Attenborough (Gandhi - 1982) chronicles the tumultuous rise of one of the greatest public figures of the 20th century - and one of its most complex private men. Vain, rebellious and highly ambitious, Churchill (Simon Ward) is the product of the stormy union between Lord Randolph (Robert Shaw), a political failure, and the haughty, Brooklyn-born Lady Lennie (Anne Bancroft).
Alienated from them, young Winston puts all his energy into winning love through performance. He begins as a war correspondent in India, later becomes a hero in South Africa during the Boer War, and eventually embarks on a political career that takes him right into the halls of Parliament. Young Winston is a glorious epic testament to this great man.

Film is based on the book 'My Early Life: A Roving Commission' (1930) by Winston Churchill.