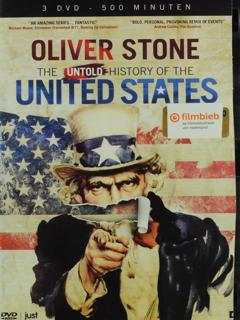 The untold history of the United States

(This text has been automatically translated by DeepL)
Oscar-winner Oliver Stone has had great success with feature films about much-discussed events in American history, such as the assassination of President Kennedy and the Vietnam War.

With this ten-part documentary series he focuses on episodes that received less attention, but were certainly of great historical significance. Together with the historian Peter Kuznick, Stone combed the national archives of the United States, the Soviet Union, Great Britain, Germany and Japan in search of revealing documents, images and other information. In doing so, Stone and Kuznick focused on a variety of subjects. For instance, they wanted to know why President Harry Truman decided to drop the first atomic bomb on Japan and how the Cold War began. During their research, the makers also came across surprising information about the terms of office of Presidents Eisenhower and Kennedy and about the various wars in which America has been involved since 1945 - including the war on terrorism.