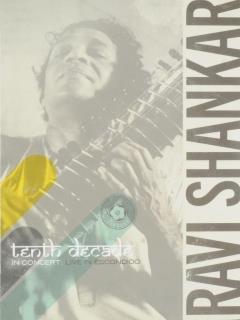 (This text has been automatically translated by Google translate)
The Indian sitar virtuoso Ravi Shankar is seen as an important promoter of Indian classical music in the West. Musicians who were looking for spiritual and musical depth in the 1960s, such as George Harrison and John Coltrane, regarded Shankar as a teacher and through them his ragas became popular. It has taken him to legendary festivals such as Woodstock and Concert For Bangladesh. Shankar (also father of Norah Jones) died in December 2012 at the age of 92. He also authorized this live DVD that contains a concert from 2011. In the sleeve he writes that he did not feel well at first, but that the music and the energy of his fellow musicians took him out of that. That can be seen and heard. The master and his six-piece ensemble start off hesitantly, but are released within the first raga. The music is wonderful and it is nice to see how the musicians communicate with each other in a respectful, friendly and encouraging way during the passionate performance. Especially in his announcements the shortness of breath of Shankar (who died of a lung disease) is clearly audible, but once speaking with his sitar he is still a great musician. (MR)

(This text has been automatically translated by Google translate)
Ravi Shankar (1920-2012) grew up in a well-off environment in Varanasi, the Hindu holy city on the Ganges. In his younger years he was active as a dancer but he eventually chose music. He was educated in the classical Indian tradition Allaudin Khan. From 1944 Shankar has composed music for films, radio gave concerts and played concerts outside India. In the sixties Shankar collaborated with Yehudi Menuhin and The Beatles. Especially with George Harrison Shankar maintained a long friendship. Partly because Ravi Shankar became the famous sitar player in the world. Two of Shankar's daughters, Norah Jones and Anoushka Shankar, also chose a career in music. more