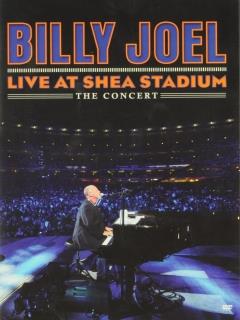 Live at the Shea Stadium : The concert

(This text has been automatically translated by Google translate)
Billy Joel at Shea Stadium? A supporter of The New York Mets, the regular player of the stadium, raises his eyebrows. Billy Joel, that's a fan of the New York Yankees, the Mets' biggest rivals! But Billy pretended nothing was wrong and he made the announcement for these shows with a hat from the Mets on his head. Well, blame Billy. He is a thoroughbred New Yorker and was allowed to give the last concert at the legendary Shea Stadium. Not only a holy grail for baseball fans, but also the stadium where The Beatles, The Who and Bruce Springsteen gave unforgettable concerts. The sixties Joel is a bit balder and heavier than in his glory years, but he turns out to be an excellent master of ceremonies who says goodbye to the beautiful stadium with a slick show. Famous guests like Garth Brooks, John Mayer, Steven Tyler (Aerosmith) and Roger Daltrey (The Who) pop by for a song, but Joel is most delighted with the contribution of his childhood hero, Paul McCartney. (PdK)

(This text has been automatically translated by Google translate)
The singer and pianist Billy Joel did in the sixties some session work before his first album released in 1971. With albums like Piano Man (1973) and The Stranger (1977) he established his reputation as a good singer and an equally good songwriter. Joel sold worldwide around 100 million records. more
(This text has been automatically translated by Google translate)
Of all the Beatles Paul McCartney was by far the most successful solo artist. Although many (including John Lennon), his work after the Beatles labeled as superficial, Paul spoke extraordinary popularity for himself. Mull Of Kintyre was a time in history as the most successful single of all time. In the nineties ventured McCartney, now named Knight of the British Empire was located on classical compositions or soundtracks, and he worked with admirers like Elvis Costello. At the same time he continued to make the kind of rock and roll that he helped develop co, but without the hitsucces he had in previous decades.

(This text has been automatically translated by Google translate)
Tony Bennett was in 1926, in Queens, New York born Anthony Dominick Benedetto. As he performed at a young age as a singer, and he had to sing ambitions of his profession. School, work and WWII him not cease this opportunity into reality. That chance he got when he was "discovered" by Bob Hope, who advised him to change his name to Tony Bennett. In 1950, Bennett got a record deal and early fifties were the first great success with several top 5 hits. Despite the popularity of rock and roll, he managed it successfully preserved. He became a crooner in the style of Frank Sinatra and his main competitor began to interest in the expressive possibilities offered by the jazz.

In the late sixties, there was a turnaround in the popularity fell Bennett and record sales, but then late seventies increased appreciation for the traditional 'standards' again, Bennett came back in the spotlight, including younger generations. He proved his successful comeback album MTV Unplugged (1994), for which he received the Grammy for album of the year. Bennett is one of the last survivors of the almost extinct generation of crooners who dressed in tuxedo and with orchestra and piano, the songs from the "Great American Songbook" interpret. more
(This text has been automatically translated by Google translate)
Country superstar Garth Brooks was born in 1962 in Tulsa, Oklahoma. In America, he sold millions of albums. Its success is a lot smaller in the Netherlands, though he had in the nineties, a few little hits.
(This text has been automatically translated by Google translate)
Widely acclaimed guitarist and vocalist in both pop and blues world has many fans. With albums like Room For Squares (2001) and Heavier Things (2003) he won the United States for its pleasant-sounding songs with jazzy chords. Netherlands finally went tack in 2005 with the song Daughters. Thereafter Mayer did some entertaining (live) plates off. That Mayer beside a virtuoso guitarist is also a gifted vocalist and talented songwriter, makes him a versatile artist is similar to his hero Eric Clapton.