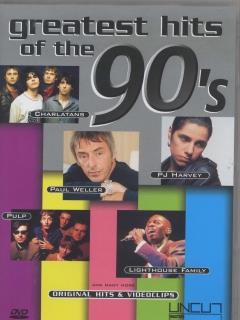 Greatest hits of the 90's

(source: wikipedia)
|Madchester|alternative rock}}James are an English rock band from Manchester, who were formed in 1982. They enjoyed popularity throughout the 1990s, with four top 10s on the UK Singles Chart and nine top 10s on the UK Albums Chart. The...
more
(This text has been automatically translated by Google translate)
Especially in his own England's Paul Weller (1958), a folk hero, often affectionately interpreted by his nickname 'The Modfather'. Weller grew up in London where he founded the popular new wave band The Jam in 1976. After that group falling apart as he plays in The Style Council, where he indulges his passion for soul and jazz. As a solo artist book Weller success with the album Wild Wood and Stanley Road. When the members of Oasis proclaim him a great inspiration Weller knows a new, young audience to tap.
(This text has been automatically translated by Google translate)
In the early nineties came Polly Jean Harveys music as a rousing battle cry in the post-punk, which they unearthed new ground for female alternative rock artists, without falling back on educating feminism. The grown over time Harvey was, she was subtle and moodier, and developed a broader view of her art, which both triphop, guitar rock troubadour shelf and found a spot.
(source: wikipedia)

(This text has been automatically translated by Google translate)
British than British Britpop band who may therefore abroad never acquired the same status as their homeland. However, the group did midjaren nineties in Netherlands well with the album Different Class and This Is Hardcore. Pivot the band was the stylish singer Jarvis Cocker who managed to create a striking image of those compatriots with his witty lyrics. The group fell apart in 2002. Cocker went on alone, but it was the solo albums by guitarist Richard Hawley which could count on the better reviews.