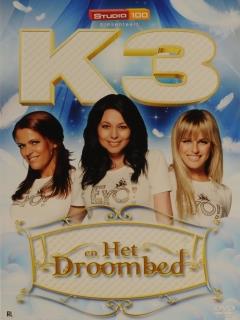 (This text has been automatically translated by Google translate)
No review of a K3 product can do without the comment that this girl group is doing a lot. If we are just a bit used to the comedy series on the public broadcaster or the 3D musical that was attended by a hundred thousand people, then K3 comes up with a new hip computer game. You sometimes wonder how hard the three disarming ladies are working. Concerned parents can breathe a sigh of relief at K3 En Het Droombed, because this DVD appears to have been made entirely on automatic pilot. The film only lasts half an hour. Subtract the lengthy introduction and closing credits and little material remains. In the short time that the viewers are allowed to enjoy themselves, they are treated to professional shots and special effects, but the story remains wafer-thin even for K3 standards. This is just one of the many K3 DVDs and certainly not a ray of hope in their rich oeuvre. However, for (grand) parents, setting up this DVD remains a good choice for a rainy Wednesday afternoon. The cheerful children's doll from K3 always scores, even if they are not really in a generous mood. (JE) 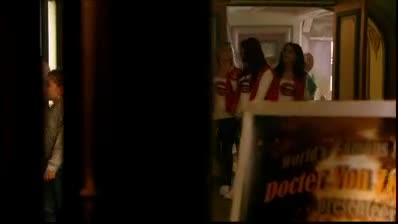 (This text has been automatically translated by Google translate)
The original whole Flemish girl group K3 (Karen, Kathleen and Kristel) focuses incredible success in the world of preschoolers. The group is signed to Studio 100, which is also responsible for successful child acts like Plop, Samson & Gert, Bumba and pirate. In 2005 the group broke a record when it twelve times in a row in the Rotterdam Ahoy hall "was programmed. Meanwhile, the girls are regular on the Dutch public channel. Q3 was a bit more Dutch when Diana Huisman (Heusden, 1986) the afzwaaiende Kathleen replaced in 2009. In 2015 the trio made known to go looking for three replacements. They were found in Klaasje Meijer, Marthe The Pillecyn and Hanne Verbruggen. more