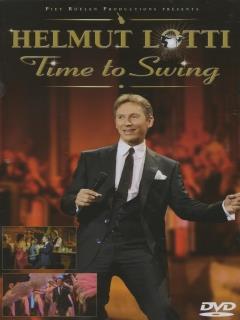 (This text has been automatically translated by Google translate)
The sympathetic Flemish singer Helmut Lotti once again thought it was time for swing, a genre that suits his warm and clear tenor voice perfectly. On this DVD, he performs swing numbers in the very suitable, atmospheric 'roaring twenties' hall of the Roma in Antwerp, where the audience sits at round tables and at the bar. The stage is completely in style, with a large show staircase, black glossy floor and glittering skyscrapers as a backdrop. Lotti sings repertoire from his album Time To Swing: English classics such as Cabaret, Fly Me To The Moon and Reet Petite, some French, German and Italian covers as well as own compositions in swing style. He is excellently accompanied by background choir, strings and a real big band. In this show, which is arranged to perfection, you can enjoy a Lotti who also tap-dances, a colorful show ballet and a guest appearance by British jazz singer Clare Teal, with whom he sings the duet LOVE. (SvdP)

Collective name for the English and American entertainment music of the first half of the twentieth century. This music is considered to be the forerunner of pop music and was written for a wide audience. Commercial motives are at least as important as artistic ones. Breadwriters supply text and music to order. The offices where the success songs originate, such as Tin Pan Alley (from 1900 to 1930) and the Brill Building (fifties and sixties), acquire mythical status as hit factories. Famous composers are Burt Bacharach, and duos such as Leiber & Stoller and Greenwich & Barry. They write for all-round stage artists who could sing, dance and act and often performed in one of the many theatres on Broadway. Recordings were an afterthought until the forties. With the rise of pop music the popularity of vocal music decreases. Nevertheless, the American Songbook, a collection of classical American songs, continues to intrigue many a soul and pop singer. more