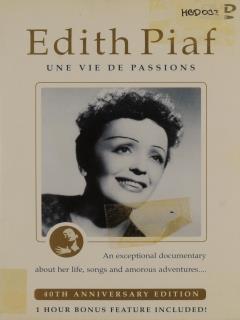 The French song, also called 'chanson'. Text is at least as important as music and reveals the French soul: romantic, impulsive and a touch of nostalgia. The current chanson originated at the beginning of the twentieth century from older song forms, some of which date back to the Middle Ages. Icons that give colour to the chanson are the fragile Edith Piaf, the mustachioed George Brassens, the Armenian immigrant son Charles Aznavour and the Belgian Jacques Brel. Johnny Hallyday mixes the chanson with rock-'n-roll while professional provocateur Serge Gainsbourg fills his chansons with spicy lyrics and influences from beat, rock and reggae. In the Netherlands, the chanson reaches its peak in the seventies when beautiful men like Julien Clerc, Joe Dassin and Dave score summer hits with smooth pop-chansons. more

(This text has been automatically translated by Google translate)
Her father is a street acrobat while her alcoholic mother sometimes makes its money in prostitution. She was born in one of the poorest neighborhoods of Paris, but grew into the most famous singer of the French chanson, Edith Piaf. Her voice with strong vibrato, her uncompromising and passionate vocal style is instantly recognizable. Piaf sings about the tough life on the streets: poverty, survival, sex and love. She wears a series of lovers, losing a loved one in an airplane crash, surviving a few car accidents, become addicted to alcohol and morphine and visiting rehabilitation clinics. But despite all the former street singer sings tirelessly makes successful tours and scored over 27 years world-famous hits such as La Vie En Rose, L'Hymne A L'Amour, Milord and Non, Je Ne Regrette Rien. Edith Piaf died in 1963 from cancer, aged 47 years. During her life supports Edith Piaf many other singers and composers in their careers, including Yves Montand, Georges Moustaki and Charles Aznavour. (CP) more