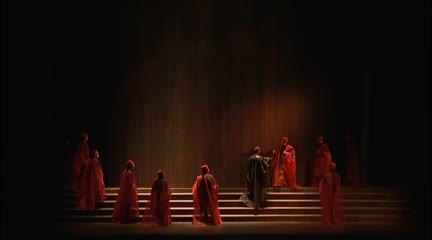 (This text has been automatically translated by Google translate)
Giuseppe Verdi, the son of an innkeeper, is considered the most important and most popular opera composer in Italy. Few composers have as well to find a balance between artistic ideals and commercial interests. Verdi is the composer of hits like La donna è mobile and Slavenkoor. He knew he always had to compose "something for the organ grinder," he wanted an opera was successful. He watched before the audience get bored. His early works are characterized by a strong rhythm which his operas a strong forward driving force grant. A common example is Il trovatore.

But Verdi was also a composer with ideals. When he was fascinated by a character, he wanted the character as well as possible in describing music. To prepare them to succeed sometimes had to manipulate or ignore the traditional opera forms such as Rigoletto, so he often had to argue with singers and songwriters. He was not afraid to socially sensitive issues to speak in his operas, even gave him problems with the established order. So his opera was outcry La traviata, in which the heroine is a courtesan.

Verdi had nothing to do with the intellectual discussions of music that were going on in his time. He tried to imagine a man of humble origins who still felt most at home in the countryside. Nevertheless, he did enjoy his last opera Falstaff conclude with a fugue, which he demonstrated his craft too well to master intellectually. (CP) more